The Funnels report displays select app funnels in graphical and tabular format. A funnel represents the linear flow through a sequence of selected app events (sent from the app to Swrve) to enable you to identify drop-offs.

To access the Funnels report, on the Analytics menu, select Funnels.

You can perform the following actions to customize the data displayed in the report:

In addition, you can perform the following actions on the Funnels screen:

The following image shows an example of a typical funnel report: 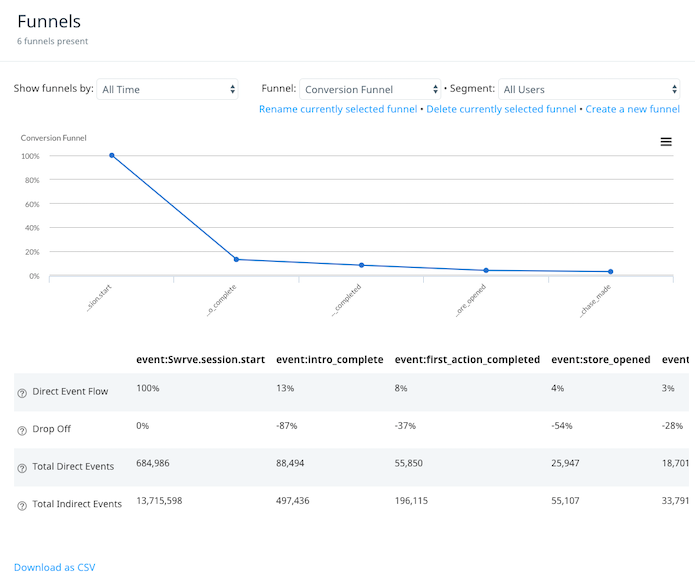 If you select All Time from the Show funnels by list, the report displays the following data for each funnel event:

If you select Week from the Show funnels by list, the report displays funnel progress data for users who started funnel progress in a particular calendar week. Users must complete the funnel within the same week to be fully counted towards that week’s funnel counts. If they fail to complete the funnel within that calendar week, they are considered as having dropped off.

For example, if a user starts a funnel at 23:59 on day 1, they are counted as contributing to that funnel on day 1. If they complete the funnel at 00:01 on day 2, they neither fully contribute to the day 1 funnel (which registers as incomplete) nor do they contribute to the day 2 funnel (because they didn’t start the funnel during day 2). The day view is useful for funnels where you expect the user to complete the funnel within a short space of time.

To customize the data displayed in the report, use the lists at the top of the graph:

The following sections provide information about the additional actions you can perform on the Funnels screen.

To create a new funnel: