Swrve Help Center > Campaigns > Reports > Campaign holdouts
Last modified April 25, 2022 by John Mcgrath
Measure the value of your campaigns by comparing key metrics between users who are exposed to a campaign versus those who aren’t with Swrve’s campaign-level holdouts.

Swrve provides you with two ways to measure the effectiveness and impact of your campaigns:

Campaign holdouts are currently available for push notification and in-app message campaigns as part of our Early Access program. To have this feature enabled for your app, contact your CSM at support@swrve.com.

Add a holdout to your campaign

The figures represented by the audience estimates depend on the campaign channel.

The control and treatment group figures represent the estimated number of users in each group for a single day.

If running a recurring push campaign over multiple days, the number of users who enter the control and treatment groups might exceed the initial estimate.

The control and treatment group figures represent the estimated number of users in each group across seven days, and do not take display trigger criteria into account. The actual number of users who view the campaign will depend on the campaign’s display criteria. For example, if you choose to display the message on app launch, more users are likely to see the campaign than if you select a specific event as the trigger.

Campaign holdouts are available regardless of the campaign’s audience source, however audience estimates are not available for external audiences.

To access the campaign holdout results, on the campaign build page select View Report, and then in the report, select the Holdout tab.

The Holdout report displays the campaign holdout details and platform-based holdout metrics for your campaign, if relevant. It also displays Swrve’s default tracking metrics and results for any custom goals you selected when creating the campaign. 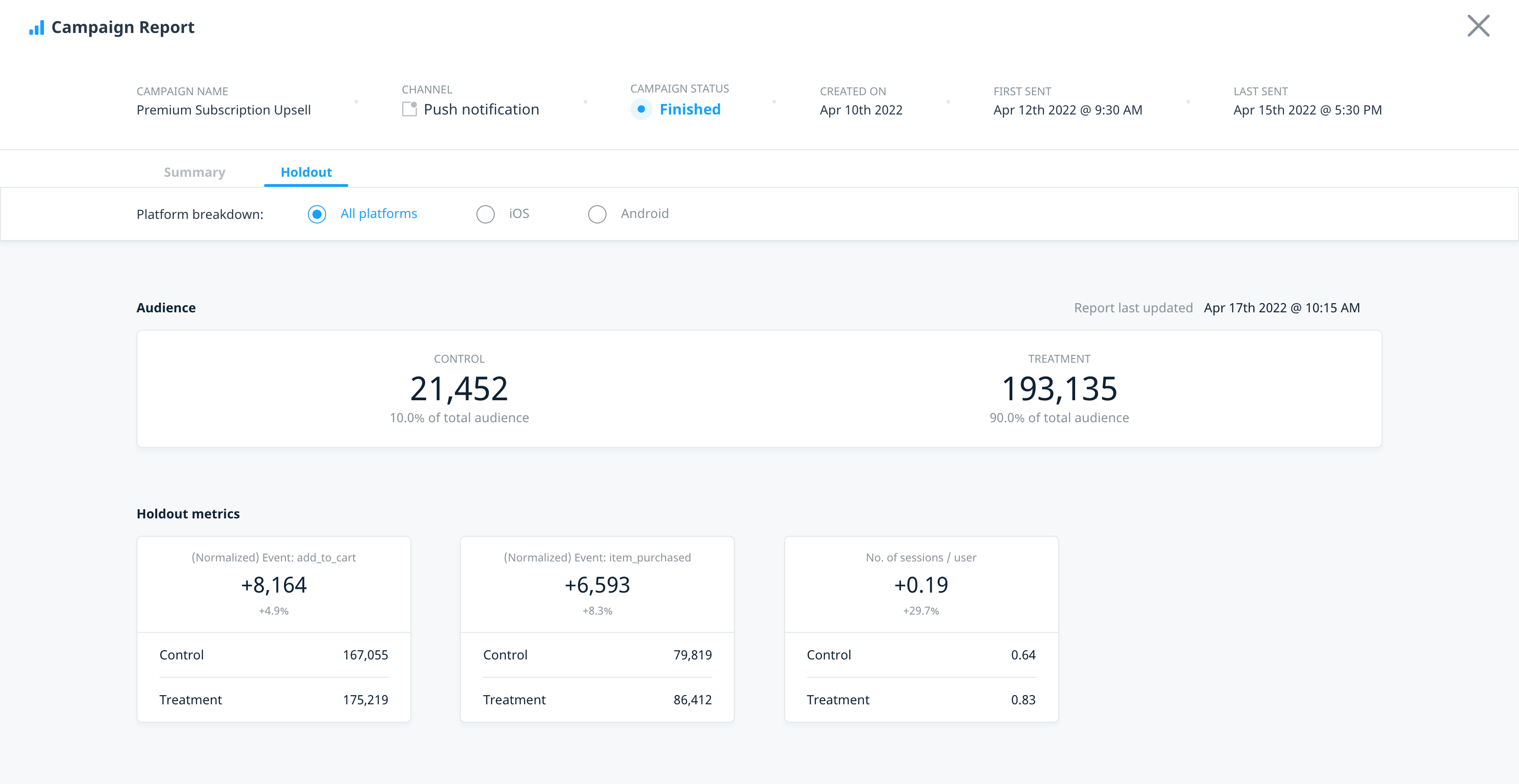 The Audience section of the report displays the number of users in the control and treatment groups.

There are slight differences in how Swrve calculates the audience metrics on the Summary tab versus the Holdout tab, depending on the campaign channel.

The Holdout metrics section displays holdout results for the default metrics and custom goals included in your campaign.

For every metric, the metric cards displays the following information for the campaign’s control and treatment groups:

Swrve calculates campaign holdout metrics using the same method as Holdout experiment results. The only difference is app-level holdouts exclude the control group from receiving all campaigns upfront, while users who are part of a campaign-level holdout are added to the group at the point when Swrve sends the push notification or the user triggers the in-app message.

Swrve tracks campaign metrics and reports on them for the attribution period you select when first setting up the campaign. For recurring campaigns, the attribution period only applies to the first engagement, influence, send (or in the case of the control group, would-be send). Any action a user takes after any subsequent engagements, influences, or sends is not attributed to the campaign.

The attribution periods used by each report differ for push notifications.

Therefore, the Holdout report treatment group figures will be larger than the Summary report figures.

For in-app message campaigns triggered on user behavior, the attribution period used by the Summary and Holdout reports is the same. The reports display metrics for users who have viewed the in-app message.

To help achieve statistical significance, the Holdout report does not display metrics for campaigns that have fewer than 1,000 unique users in each of the control and treatment groups.

If the campaign is ongoing (recurring), the number of users in the control and treatment groups may increase over time. If results are not immediately available, return to the report at a later time to check if the campaign has reached the minimum audience threshold. If the campaign ends without reaching the 1,000 user per group minimum, Swrve deems the results as inconclusive and does not display the Holdout report.