Swrve’s background update campaigns use a silent notification to update your app content in the background and, if applicable, add a badge icon to notify the user about the app update. Background updates are available in our consolidated campaign flow as a separate campaign channel. You have the option to add your payload content and launch the campaign directly from Swrve or trigger it externally through our Push API.

To send background updates to your app, your development team must implement silent or background notifications when integrating the Swrve SDK. For more details, see the relevant platform guide.

The first steps for setting up a background update campaign are the same as other channels, with a few extra actions.

The blocks on the campaign screen guide you through building your campaign, but you can complete them in any order. 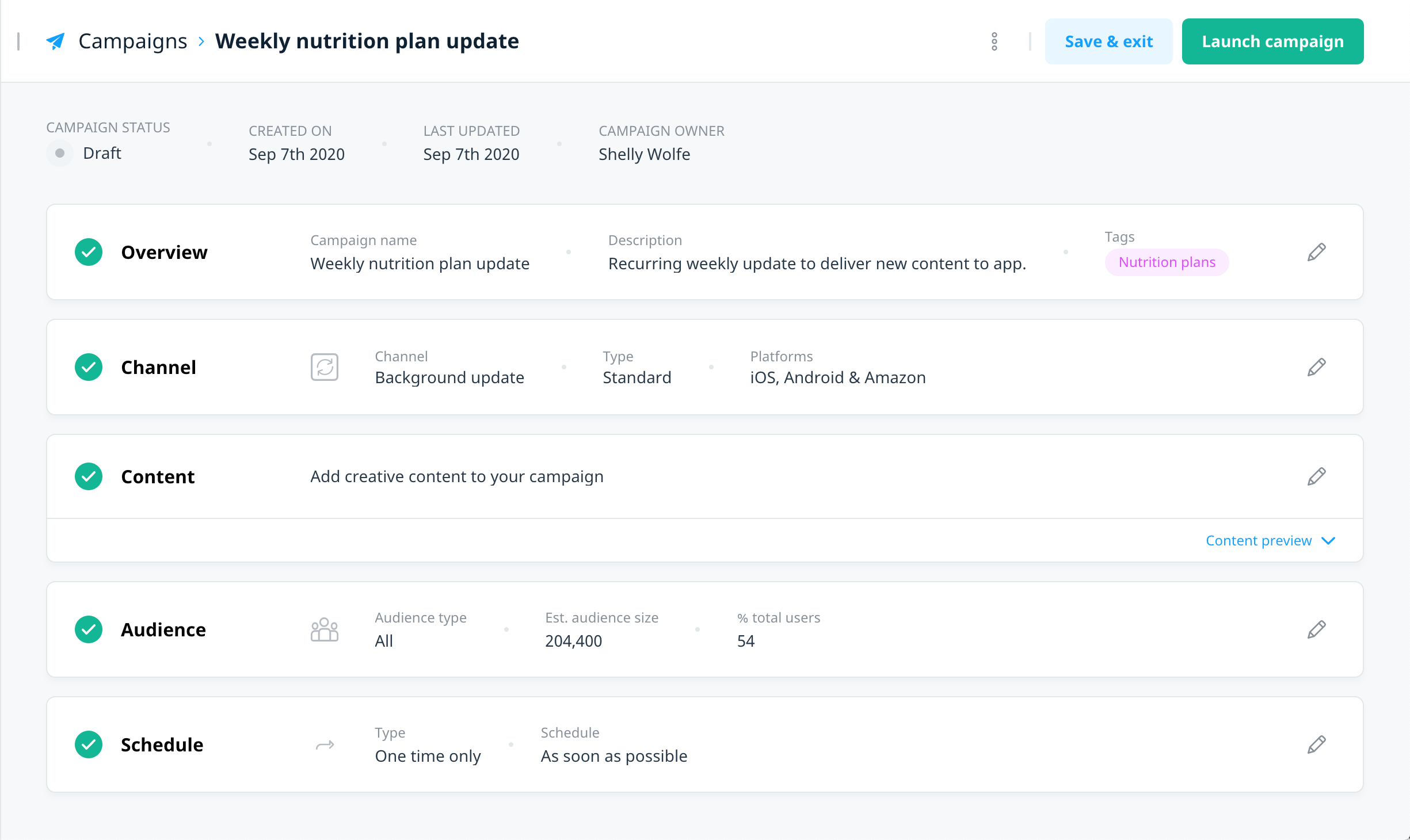 This article mainly covers how to add campaign content, test, and launch your background update campaign. To learn how create your target audience and schedule a the campaign, see the following:

API-triggered campaigns don’t require a target audience or schedule, since they’re triggered by an external system.

Since the purpose of a background update campaign is to silently wake up the app and update it when it’s running in the background, the content of the campaign consists of a payload, or key-value pairs, that tells the app what content it needs to download.

For API-triggered campaigns, adding content is optional. If the API call includes custom parameters, it overwrites the default content. Note: API campaigns do not include the option to add multiple languages or variants.

One of the most exciting features of our streamlined campaign flow is the ability to localize and A/B test your campaign content within a single, unified campaign. Use the Languages and Variant tabs to create localized versions of your content or create variations of your content to test for best conversion.

Because background updates don’t display a visible notification, the expected outcome of testing the campaign depends on how your development team has configured your app to handle silent notifications. If you selected the option to display a badge on the app icon, the badge will appear and confirm the test message was successful. To test the campaign on a physical device, first ensure your device is set up on the QA Devices screen.

If your campaign includes multiple languages and variants, select the language or variant you want to test, and then in the header bar, select Test. Select your device from the list and then select Send.

If you have no further changes to your campaign, on the campaign build screen, select Launch or Schedule campaign.

To make an API campaign active, on the Campaign builder, select Activate campaign.

Once the campaign is active, use the campaign-specific Push API Key and URL displayed on the API block to trigger background updates to individual users, either via webhooks from a third-party system or using your own custom code. For more information on the API call method, URL parameter, expected responses, and possible error codes, see the Swrve push API guide.

Once a campaign is active there are two options for viewing the campaign details and results: 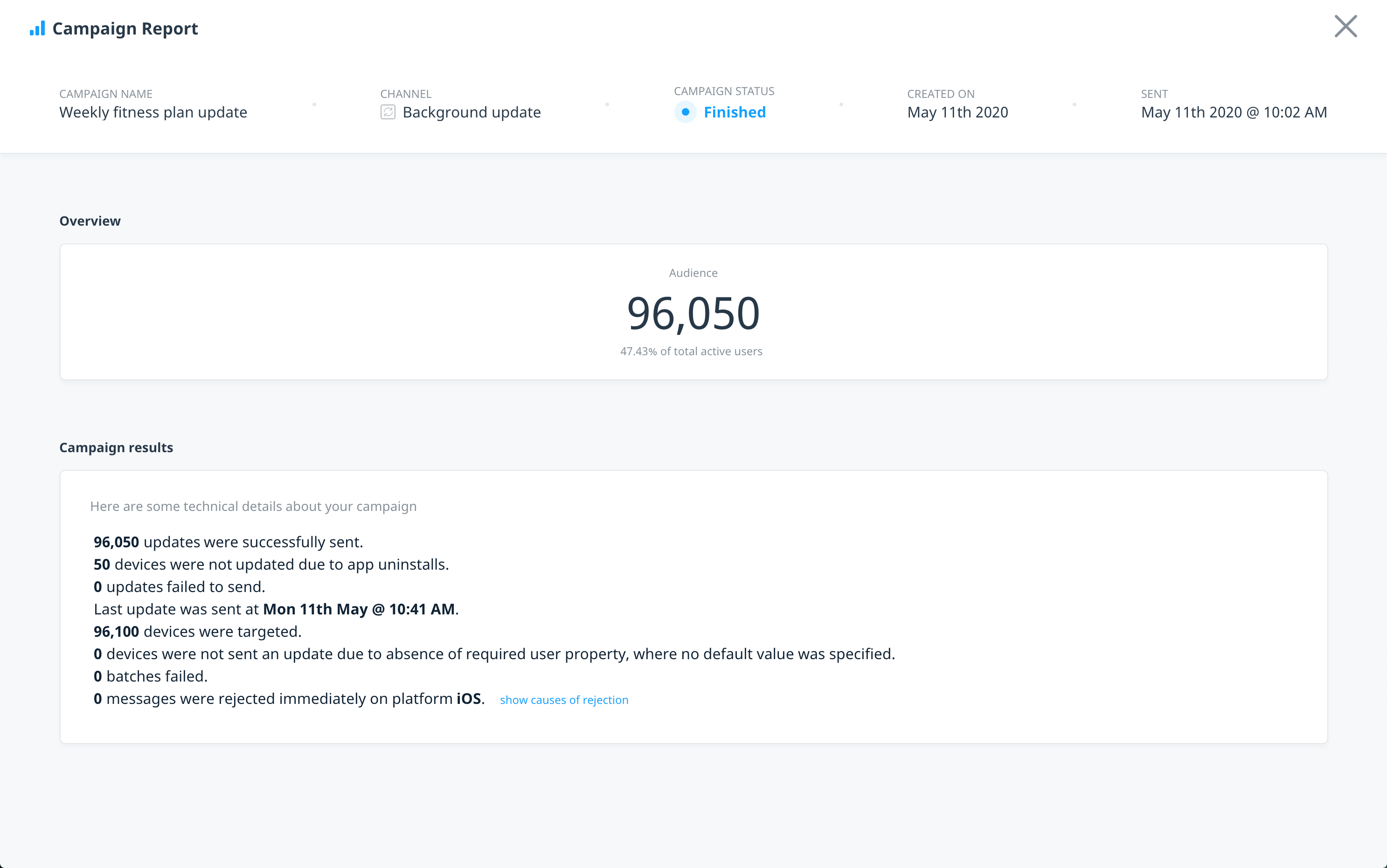 The Overview section displays the total Audience to which the campaign was sent. Note, this number may be slightly different from your targeted audience due to factors like app uninstalls or send failures. The percentage of your active user base that the audience represents is displayed below the audience figure.

For campaigns sent Via API, the Audience represents the total number of users who have been sent the update, as triggered by the API call.

The Campaign results section displays the following details about the sent and delivery results of your campaign, depending on the type of campaign—Scheduled (one time and recurring) or Via API.

The Campaign results for updates triggered via API include a few additional items. For detailed information about failure reasons listed below, see the Push API guide.