Swrve Help Center > Campaigns > Campaign retargeting > How do I target my audience using one time push campaigns?
Last modified August 25, 2020 by John Mcgrath
Target your users based on their interactions with one time push notification campaigns.

Our Custom Audience builder User Behavior filters now support audience targeting based on users’ push notification activities. This article explains how to use Swrve’s new campaign behavioral filters to target users based on their exposure to and interactions with one time push campaigns.

For an overview of the Campaigns filter options, see Targeting your audience by push notification events.

To create the following target audience filters, select the Specific push notification campaign option. Additionally, if you select a multi-variant push campaign or a campaign containing custom buttons, the Campaign filters include the option to specify A/B test variants and custom buttons as part of your audience criteria.

For example, suppose you ran a one time, A/B tested push notification on Black Friday promoting a limited time deal. You might want to follow up with users who showed interest in the deal with a similar campaign on Cyber Monday.

To target users who engaged with or were influenced by your Black Friday campaign:

Unlike recurring and push via API campaigns, one time push notifications do not require you to set a frequency value, as a user only receives the campaign once. Similarly, for one time campaigns the recency value is only available for the engaged and button click actions. All other actions—influenced, sent, and received—do not require a recency, as a user can only trigger the event on the day the campaign is launched.

Suppose you ran a one time campaign with multiple A/B test variants, and the engagement results for Variant A were significantly better than Variant B. You might want to follow up with users who received Variant B with a push notification that uses similar content and language to Variant A, to see if you can boost their engagement.

To target users who received Variant B:

Suppose you ran a one time push notification campaign that included multiple custom buttons, each promoting a specific item. You might want to retarget users based on the button they clicked to better align future campaigns with those users’ interests.

To target interaction with a specific button:

As you hover over the campaigns in the Campaign list, the preview displays details of any custom buttons. 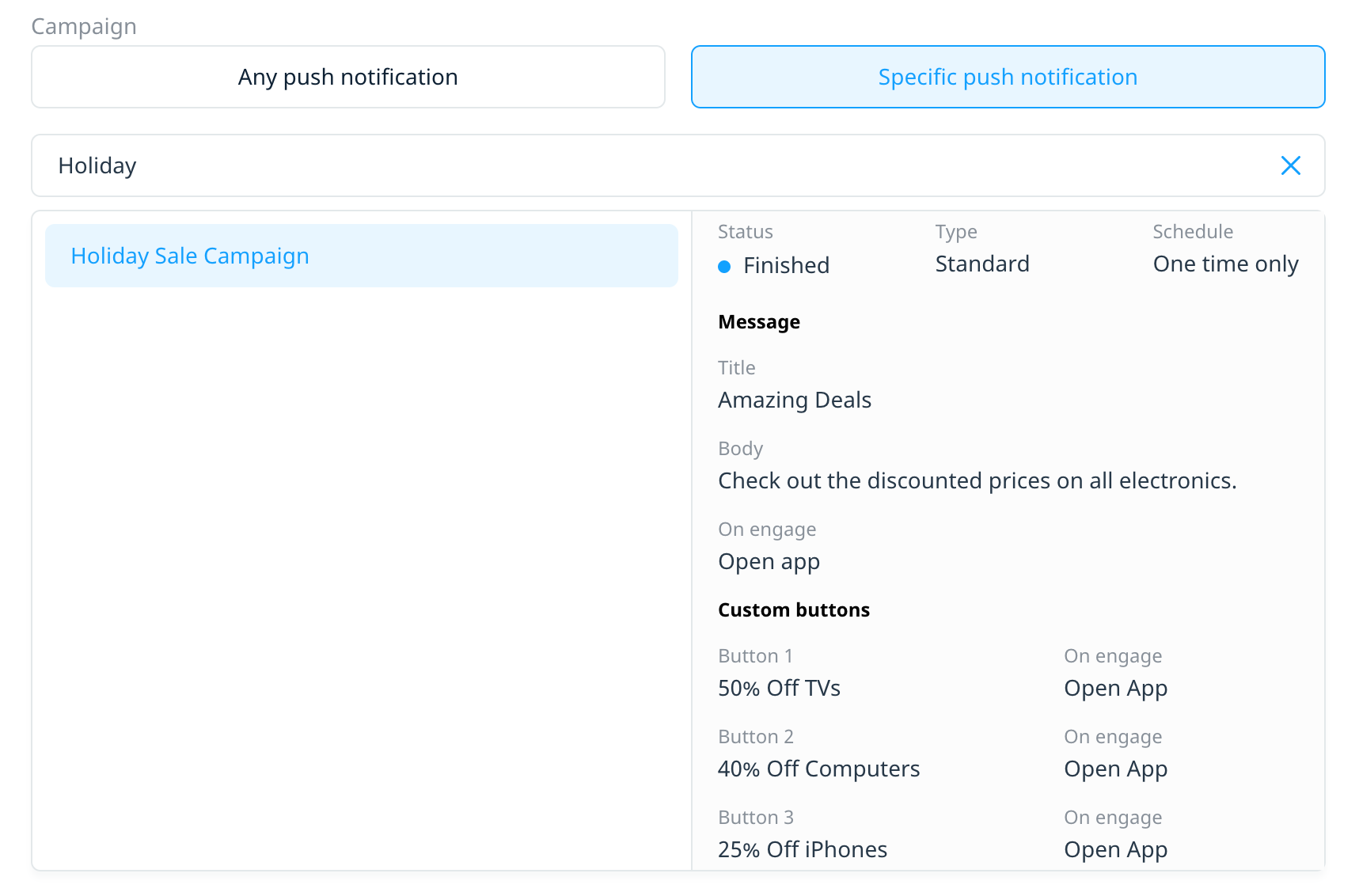