Swrve’s campaign activity filters help you enhance your target audiences by factoring in how users respond to your historical campaigns. You might already target your users based on their interactions with an in-app message campaign—for example, users who saw but did not click a Black Friday in-app message promotion. Use push notification filters to define similar criteria based on push campaigns, but with even more granularity. For example, target users who engaged with your Abandon Cart push notification in the last seven days, but did not complete a purchase.

This article explains how to build audiences using push notification activities and explains how the filters for various push activity types work. It also provides several examples to help you learn how to use granular push campaign data to create highly relevant, targeted audiences for all your campaigns.

Swrve automatically tracks some push events by default, such as Sent and Engaged. However, push Influenced and Delivered events have certain SDK-version dependencies or require extra integration steps. To use delivered or influenced events to target your audience, your development team must complete the following:

The User Behavior Filters section of the audience builder now includes a separate tab for Campaigns. Presently, it provides options for targeting users based on their interactions with push notification campaigns only, whether any push campaign or a specific campaign. In-app message campaign retargeting is still available as part of the User Profiles Filters, Campaigns tab.

Combine the campaign targeting filters with user profile filters and event payload criteria to build your audiences, such as outlined in the following examples. For detailed information on how to build such audiences, see the specific articles for each type of campaign.

For more information on retargeting one time campaigns, see How do I target my audience using one time push campaigns?

For more information on retargeting lifecycle campaigns, see How do I target my audience using recurring and push via API campaigns?

For more information on retargeting geo campaigns, see How do I target my audience using geo-triggered campaigns?

For more information on using campaign filters to control the frequency of campaign exposure, see How do I target my users based on exposure to any push campaign?

To successfully target your audience using campaign criteria, it’s important to understand how the filters and options available work together to form your target audience. To access push campaign filters, in the Target Audience step or Audience block of the campaign workflow, select Custom Audience, and then under User Behavior Filters, select Campaigns. 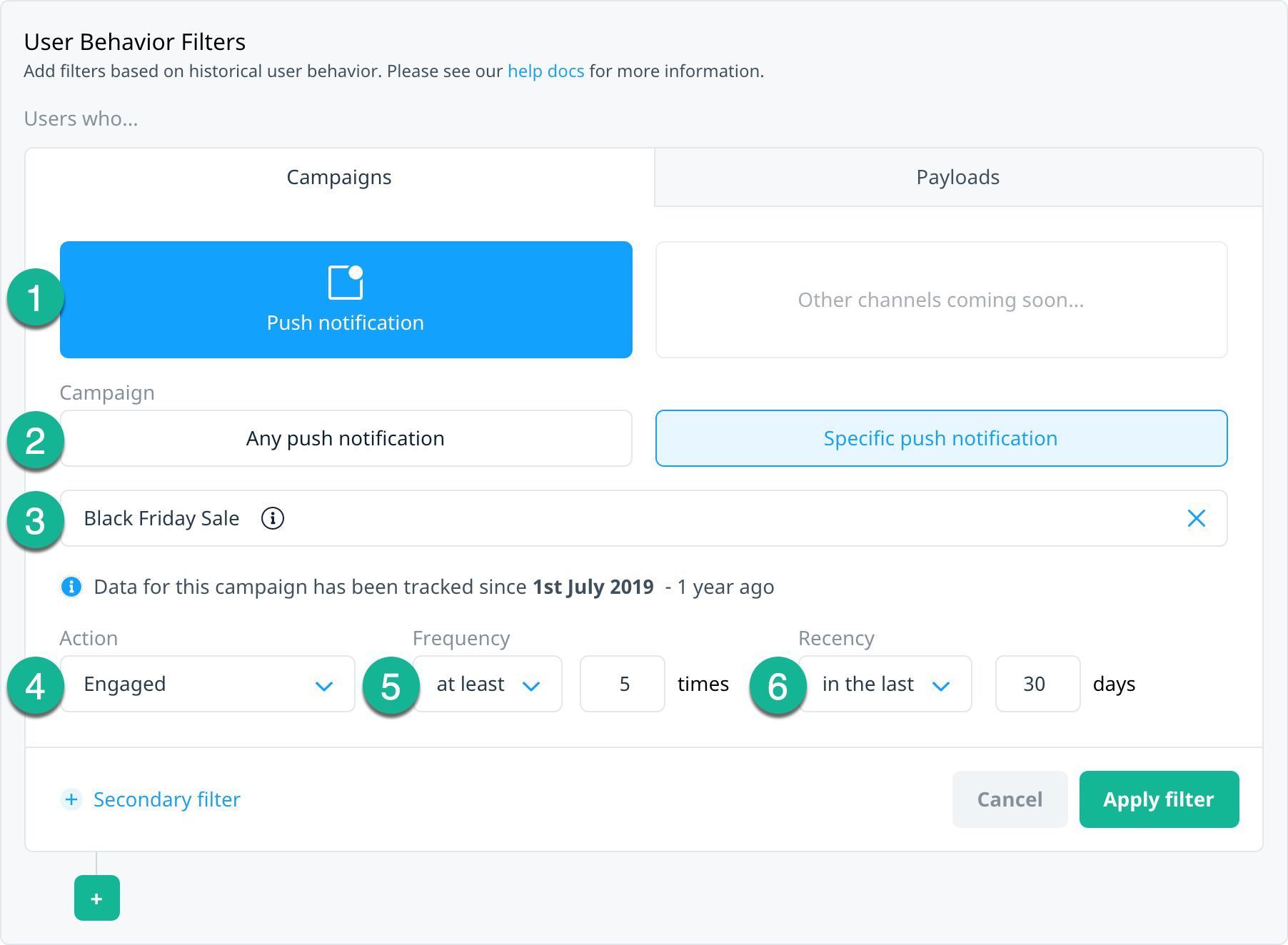 The following sections describe the actions and operators that are available once you select a campaign.

Selecting one of the negative actions (Not sent, Not delivered, Not engaged, Not influenced, Did not click button) does not limit the audience to users targeted by the selected campaign. For example, if you selected a Black Friday campaign and the Not engaged action, all users who didn’t engaged with the Black Friday campaign—including those who didn’t receive the campaign—are targeted.

The frequency value specified for combined actions only applies to the positive activity in the action. The negative activity is always assumed to be zero (0) in the target audience query. For example, if you create the filter, Delivered but not engaged at least 5 times, only users who were delivered the push notification at least five times and engaged with the push notification zero times are targeted.

The action frequency operators are applied with the other filter constraints (that is, the time frame and campaign).

The action recency operators determine the time frame over which to measure the event frequency and associated campaign actions.

Setting the recency to Anytime does not limit the filter’s timeframe to the date when Swrve started tracking push notification events for your app. This only has implications when you select the Any Push Notification option followed by a negative action—Not sent, Not delivered, Not engaged, Not influenced, Did not click button.

For this reason, we suggest always specifying a timeframe within the date or days ago value shown in the info message, especially when selecting a negative action. (For more information, see Push event tracking and recency considerations below.)

This section shows you how to use primary and secondary filters to create target audience criteria based on user behavior associated with push notification campaigns.

Switching the primary filter or secondary filter automatically changes the operators to the opposite configuration (that is, from AND to OR, and, from OR to AND). 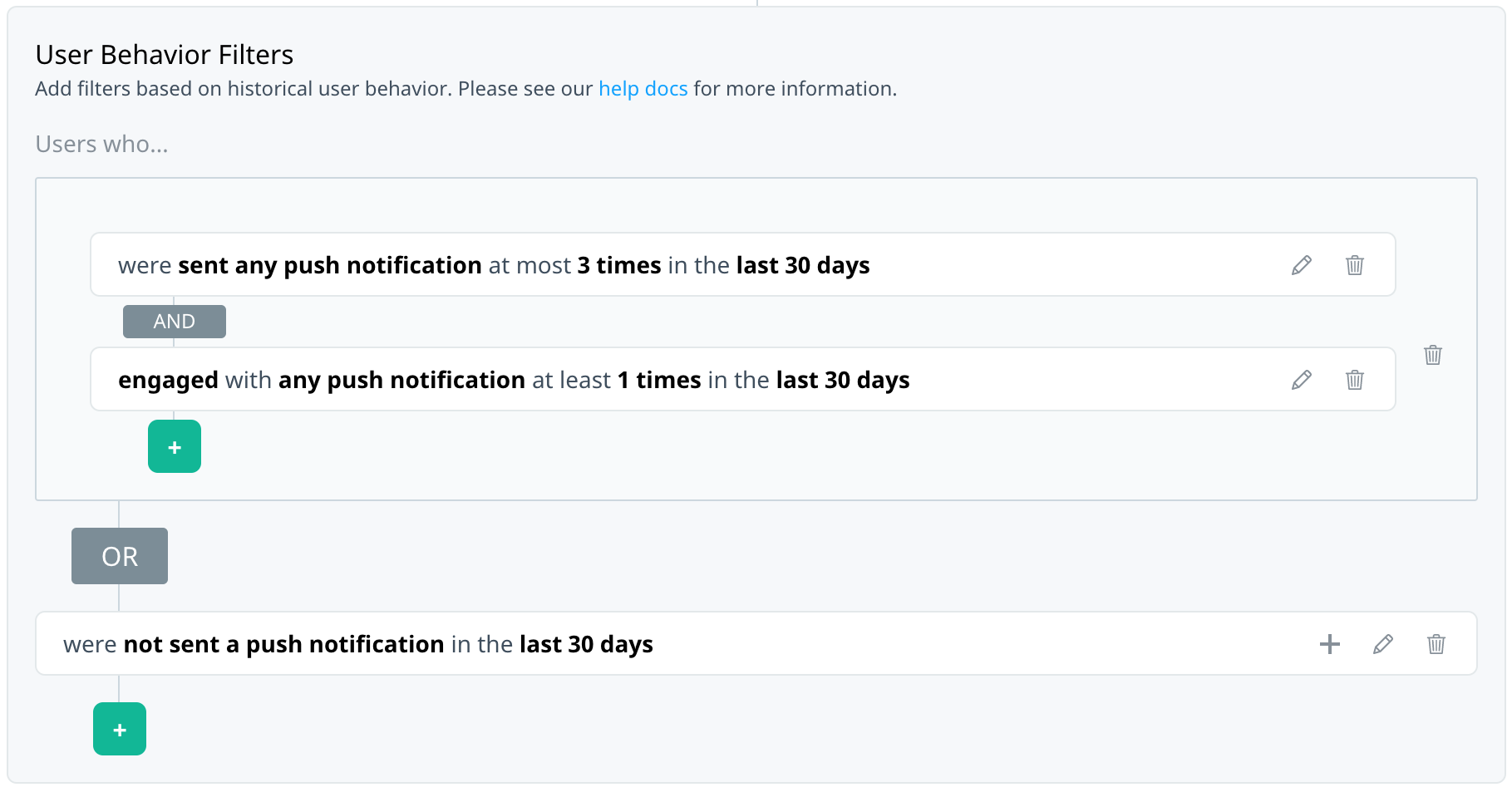 When the first filter in the group is in edit state 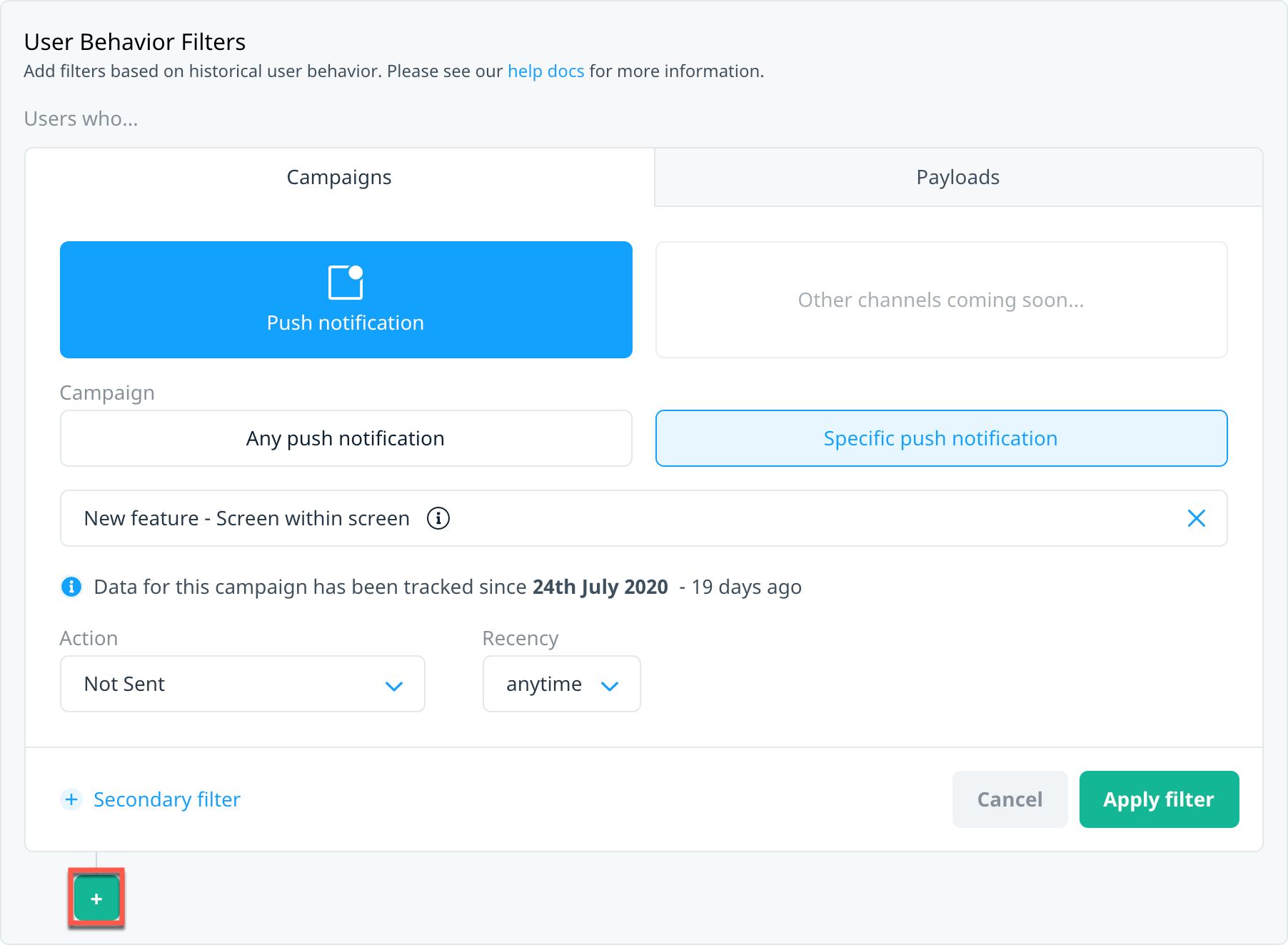 When you’ve applied a single filter

When you’ve added multiple filters within a group

To add a second filter within a group while editing a filter, select + Secondary filter.

To add a second filter within a group after applying the first filter in the group, select Add a secondary filter on the summary bar.

You might want to target users who interacted with specific variants or elements of your campaign, such as A/B test variants, custom buttons, or geoplaces, when applicable.

If you have selected a specific push notification campaign that includes A/B test variants, you have the option to specify campaign variant(s) as part of your filter criteria. For example, you might only want to target users who engaged with Variant A or Variant D of the selected campaign.

To specify a variant, under the campaign list, select + Specify variant.

The Select variant list displays all variants linked to the campaign. To include specific variants, select X on a variant label to remove them from the list until it includes only the variants you want to target.

If you select a geo-triggered campaign from the Campaigns list, you have the option to specify geoplaces as part of your criteria. To specify a geoplace, under the campaign list, select + Specify geoplaces:

The Select geoplace list includes all geoplaces associated with the campaign. Select the geoplace(s) you want to specify from the list. Multiple geoplaces are separated by OR operators, meaning that triggering the action on any of selected geoplaces qualifies the user for the campaign.

When you select Clicked button as your campaign action filter, you have the option to include specific buttons as part of your filter criteria, if relevant. In the Select button list, select the button(s) you want to include in the filter criteria.

Multiple buttons are separated by OR operators, meaning that interacting with any of the specified buttons qualifies the user for the campaign.

Targeting based on push notification exposure and interactions

You might want to target your users based on how frequently or recently a user has been exposed to or interacted with push notifications, regardless of the source campaign.

Target users who engaged with at least five notifications in the last month:

Target users who received at least one push notification during the week of Christmas to New Years:

You might want to target your users based on their lack of exposure to or interaction with push notifications, regardless of the source campaign.

For example, target users who did not engage and were not influenced by any push notifications in the last two weeks. Use a secondary AND filter to target multiple actions within a group:

Alternatively, target users who were not sent any push notifications in the last week:

After you’ve added the required user behavior campaign filters, to save the audience to your campaign, select Apply filters. A summary of the filter is displayed. Edit or add to the filter as needed.

The following actions are available on the filter summary:

Filters based on push notification actions rely on the presence of Swrve’s push notification events to accurately target users. This dependency impacts the recency criteria you define when your set up your target audience filters.

To help you define your filter’s recency criteria correctly, the audience builder displays an information message that references the date from which Swrve has tracked campaign data, and how many days ago that date is as of today.

If you select a specific push notification campaign, the date corresponds to the start date of the campaign:

Always refer to the date or number of days ago value when determining the recency filter range, especially if you select a negative action (Not sent, Not delivered, Not engaged, Not influenced, Did not click button). In these instances, the number of days ago recency should never exceed this value. Furthermore, when using negative actions, you should always specify a days ago value instead of selecting the Anytime option.

Learn how to use the different push campaign filters to target your audiences across all campaign channels. For more information, see the following campaign retargeting How to guides: