Session metrics are useful for understanding your users’ engagement with your app. In terms of Swrve KPIs, there are three related metrics that you can examine:

For a general overview of the KPIs available in Swrve, see Intro to KPIs. For more information about creating reports using session-related metrics, see Trend Reports.

The following example shows the Avg Session Length, Session Count, and Avg Time in App per Day KPIs on a sample Trend Report. 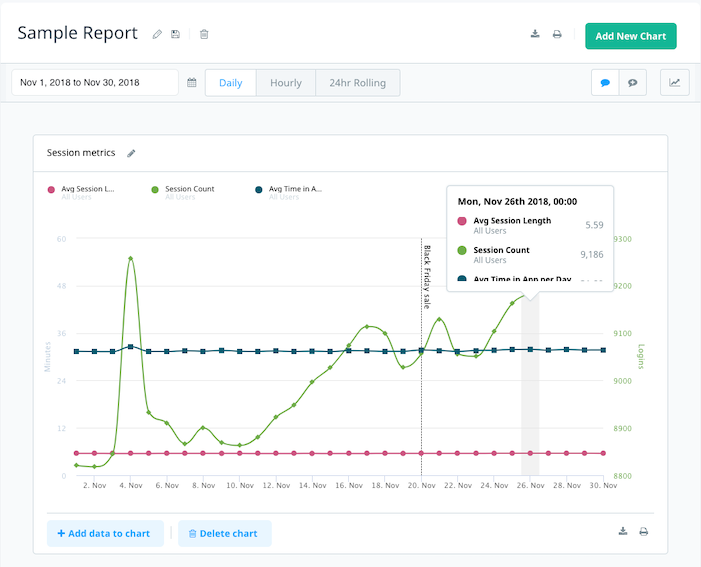 The following is a summary of Swrve’s session data metrics:

Sessions that span two days are counted against the day on which the session started.

A session begins when Swrve receives a session_start event. You can specify a session to represent the interactive portion of your app (that is, the user presses start and the session calculates until the user reaches the end of the action), or the user’s entire experience on your application (that is, from the moment they open an app until it is closed).

While a session_start event begins a session, there are three ways a session may end:

For events sent via the batch API (which is used by the iOS, Android, and Unity SDKs), there are some additional considerations used when calculating session metrics. Additional data from the client (the time that the event happened according to the client) is used for calculating the length of sessions. However, the client timestamp is not used for determining the time at which the session happened. This is because the time on client devices tends to be, in a small number of cases, incorrect (and in many cases can go so far as being wrong by years). For more information, see the Swrve Events API guide.